Monsters Of The Midwest Covering all things Chicago Bears
Home Blog Posts Three Ups and Three Downs versus the Dolphins. 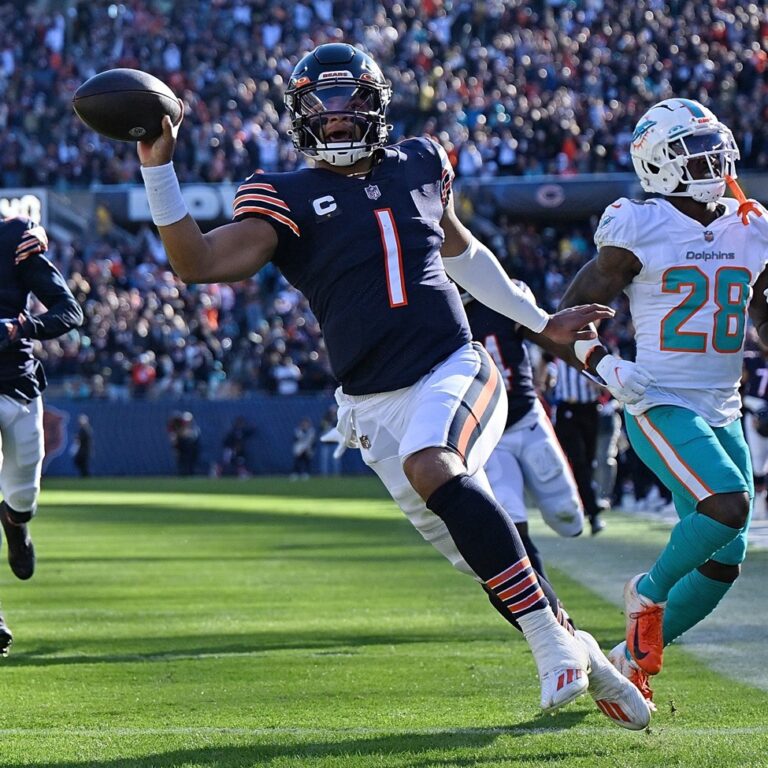 The Chicago Bears took on the Miami Dolphins Sunday afternoon on a perfect day on the lake front in Chicago. The game was a very high-scoring game that had both offenses rolling. Unfortunately, the Bears could not come out on top as they lost 35-32 to the Dolphins. I will give you my three positives and negatives from yesterday’s game.

The play of quarterback Justin Fields. The Bears quarterback has continued to take steps week by week, and yesterday, he took a giant step. Justin gave his offense and his team a chance to win with the plays he made time after time. Fields had four total touchdowns. Three through the air and a 61-yard touchdown run as he escaped the pocket and took off for the endzone. Fields broke an NFL record for the most rushing yards for a quarterback Michael Vick held as he ran for 178 yards.

The Chicago Bears offensive line. This is a group that had been struggling but it had one of it’s better days yesterday. The Bears led the NFL in most sacks given up and only gave up one to a pretty good Dolphins defensive line, which just added Bradley Chubb. Everything starts up front, which is why the offense had a good day. Keep Justin clean, and good things happen to Chicago.

Wide Receiver Darnell Mooney and Tight End Cole Kmet. The two combined for three of the four touchdowns from the Bears’ offense. Kmet had two touchdowns, and Mooney with the other. Our fans have been waiting for Kmet to break out and be a weapon for the past few weeks. Yesterday was his best game. Darnell Mooney had a great catch in the back corner of the endzone that got him off the hook, giving him his first touchdown of the season.

I will start with the defense. The Bears defense tgave up 42 points last week and 35 this week. Tua and the Miami offense had their way with the Bears. I know the defense needs more talent, but the adjustments that we have seen in the past were not there.

The Bears running back room is down this week. Outside of Justin Fields, Herbert and Montgomery were a non-factor. The two ran for a combined 59 yards. Kind of a disappointment because they have been excellent on the ground, averaging way over 100 yards a game. Usually a critical factor in the red zone as well. But not do much at all yesterday.

The Bears’ special teams. A unit that has been good this season so far got a punt blocked that led to a Miami scoop and score. The bears had Khalil Herbert lined up as a blocker and he completely missed his block. Confused about why he was on the punt team as a running back, but it hurt the Bears today.

That is it for Three ups and Three downs. I will be back next week after the Bears take on the Lions!