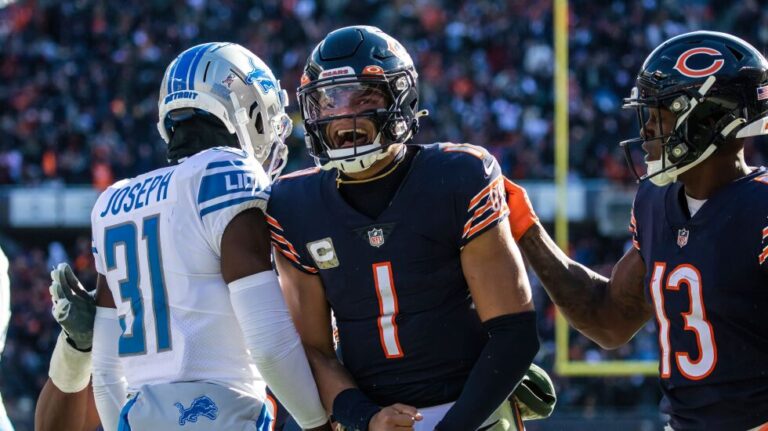 Q: Do you think Chase Claypool will make a big enough impact to help the Bears win some games this year?

A: I think he could bring a nice element to this offense. The problem with winning games isn’t the Offense, it’s the Defense. Chase Claypool brings the size and speed element the Bears were missing. I’d like to get some more 50-50 balls to Claypool.

Q: What percent of snaps do you see Chase Claypool playing next week?

A: First game he was at 35 percent of snaps. Second game it dropped a little to 31 percent. Getsy and co, have continuously said that this offense requires a lot from the receivers. Claypool is into his 3rd week of this new offense. I expect him to get around 50 percent.

Q: I can’t decide if edge or O-line should be the first need addressed in the draft. Do you like one or the other with the Bear’s top pick in the draft next year?

A: I think you have to go off the prospects available on your big board. I would go with the following in order. Will Anderson – edge, Jalen Carter – 3tech, Myles Murphy – edge, Peter Skoronski – LT, Bryan Bresee – DT, Quentin Johnston – WR, Jordan Addison – WR. The Bears have too many weaknesses on this roster to not take the best available at every position except QB.

Q: Do the Bears add another weapon at WR? Or maybe trade back with a team needing a QB?

A: Yes, the Bears have to add more weapons in the WR room. We need playmakers bad at the WR position. I would love it if we traded down with a QB-needy team. Teams like the Colts, Saints, Panthers, and maybe a shocking Raiders. Receivers I would want are as followed. Quinten Johnston, Jordan Addison, Jaxon Smith-Njiba, Jordan Addison, Kayshon Boutte, Jalin Hyatt, and Josh Downs. A late down guy Keylon Stokes from Tulsa.. only because we have the same last name. Another bonus late-round guy, the 6’6 Jalen Sample from Minnesota State, depends on his 40 times, he might need to switch to TE.