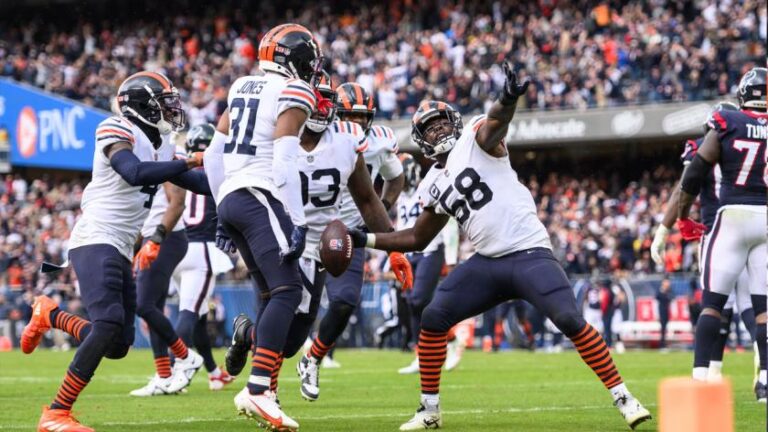 The Chicago Bears are through seven games and are coming off an impressive win over the New England Patriots. Ryan Poles made it clear that this was going to be rebuilt by trading a few key pieces that helped the Bears last season. Also, Ryan Poles did not go out and spend a ton of money this past off-season to make the team better. Made low-risk and hopefully high-reward signings that could help now and for the future. The Bears are lacking a lot of talent on both sides of the football. One of the main reasons why they are sitting at 3-4. I am going go to give a letter grade on both sides of the ball and reasons for it and how it can be better,

Starting with Bears quarterback Justin Fields and the offense. There have been signs where we the fans think that the offense will take another step but it has been one step forward and two steps back. The only bright spot so far through seven games is that the running game has been very good. David Montgomery and Khalil Herbert combined are averaging 5.8 yards per carry. One of the biggest disappointments has been the Bears wide receiver group. Feel like it has been a miracle round of who is going to catch the ball. Production is one of the worst in the league. Fields go to target Darnell Mooney has shown flashes but not to what everyone thought he was going to do.

Now onto the offense line. They say if you do not have an offensive line you won’t have an offense. This group has been on the struggle bus. The frustrating part is that it took the Bears coaching staff to come to the realization that Sam Mustipher is not going to cut it at the center spot a bit too late. Only to have Lucas Patrick go down with an injury against the Patriots. At times that’s what has been some of Fields struggles is having a center that can not do the job the way it needs to be done.

Overall, I would give the offense a C. We just need to see more from everyone. Justin can not be running for his life to be successful. Has he been good? No. Has he been bad? No. He has taken strides but he needs help to take the step we all want him to take.

To the defensive side of the ball. It’s a similar story such as the offense. It has been up and down with a bit more in consistency. The back end of the defense has been the best part on that side of the ball. Yes, they gave up a ton of yards to the Vikings but have since made some subtle changes and got on the right track. Eddie Jackson is back to his old self and the two rookies Kyler Gordon and Jaquan Brisker have proven they belong in the NFL.

The rush defense has made some strides in the last few weeks considering what they gave up against the Packers. Not a lot of popular names on the front but have done a solid job. What remains the weakest part of the defense is that they are not getting much pressure on the quarterback. This only becomes more magnified with the trade of Robert Quinn to the Eagles.

Side note, the second-half adjustments have been excellent from defense coordinator Allan Williams.

Overall I would give the defense a B. Over the past few weeks and being able to make adjustments when needed has been a sight for sore eyes. They have to get the pass rush better and do so without Quinn.

We all know the Bears chances of making a run into the playoffs are slim. They can make this season feel like a positive if they continue to develop the key players that will be here in the future.