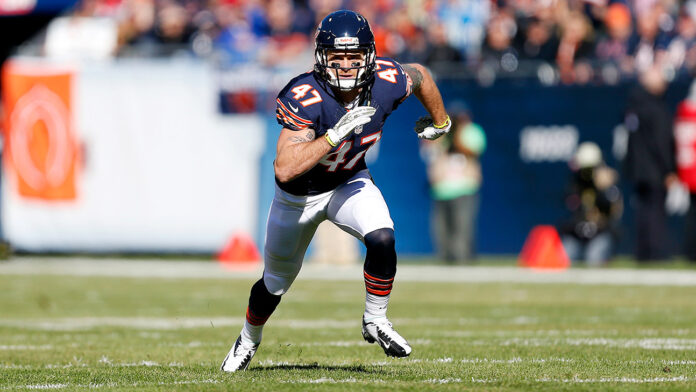 We always sit around and talk about our favorite Bears players of all time. Well, our group chat was a bit different on Monday. The topic came up of who our most hated Bears player of all time was. So we grabbed a few notes from our folks and decided to share them with you!

This week at Monsters of the Midwest we will discuss some of our most disliked Bears. Personally, for me, I’d have to go with the one and only Rashaad Coward. After going undrafted in 2017, Coward signed with the Bears as a defensive tackle. However, after his rookie season, Coach Nagy decided it would be a good idea for him to switch to the offensive line. During his two seasons with the Bears, Coward finished with PFF grades of 46.2 and 51.7. Bad right? Well, when you turn on the tape, it gets worse. On tape, you see Coward had many flaws, including panicking, the bad technique in pass protection, recognizing exotic fronts, and slow feet. Obviously, his inexperience at the position played a role, but the willingness of the coaches to play him was confusing. Currently, Coward sees himself competing for a spot with the Cardinals after a short stint with the Steelers in 2021.

There are a lot of hateable dudes in Bears history, but perhaps none more hateable than a certain Christopher Michael Conte. I can’t think of any player in recent history that has been shoved on a fanbase as hard as #47. Everyone…LITERALLY EVERYONE…knew Conte was terrible and hated the guy’s guts, but year-in and year-out we lined this bum up at safety.

Chris Conte was so bad that my college dorm floor created a drinking game centered around his miscues. While I can’t remember the exact rules to the game, it probably says a lot about how awful Chris Conte actually was….there was a LOT of alcohol consumed. To this day, nothing picks me up quite like:

I hope the door didn’t hit him on the hind end too hard on his way out of town.

For now the title of my most hated Chicago Bear has to go to Adam Shaheen. It starts with the opportunity cost of his draft pick at 45th overall in 2017. Other offensive weapons that were picked after him include Cooper Kupp, Alvin Kamara, and JuJu Smith-Schuster. If we’re talking strictly TEs, this pick could have been Jonnu Smith or George Kittle. It was obvious right away that this pick was a reach from a small school. He couldn’t catch. He couldn’t block. He couldn’t say healthy. After three seasons he was shipped to the Dolphins for a late-round pick, just to say we recouped something for him. Final stats in Chicago: 26 receptions, 249 yards, 4 TDs. That’s to say nothing of his off-the-field presence, which can generously be described as “detached from reality”. In a bit of comedy, right now the Dolphins can’t trade him because he can’t pass a physical, but I’m sure he’s done his own research about that. Good riddance.

There has been many Bears that have failed at their job or been disrespectful while being with the organization. For the longest time, my least favorite Chicago Bear was Chris Conte. A guy that blew multiple coverages and blamed it on someone else. Well, that changed in 2018. My least favorite Bear to this day is former kicker Cody Parkey. The guy who double-doinked it in the playoff game against the Eagles. A team that could have gone to the super bowl. Parkey struggled all year but when a big kick was coming, he failed. To make matters worse, Cody went on a national morning show and whined, hoping everyone would feel bad for him. If he would have just gone on his Mary way it would have not been a problem. To go on the today show and make a fool of himself is why he’s number one on my list as my least favorite Bear.