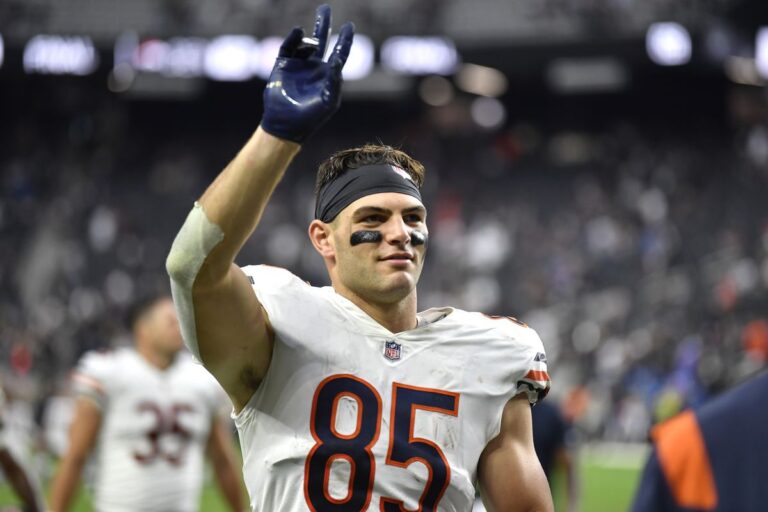 Let me tell you about Cole Kmet. The 23-year-old from Barrington, IL grew up a Bears fan. His favorite players growing up were Brian Urlacher and Greg Olsen. He went on to start all four years at Notre Dame. CBS Sports ranked him as the top Tight End for the 2020 draft class and many others agreed. Our beloved Bears would go on to select Kmet in the second round.

Tight Ends were essential for Matt Nagy’s west coast office, Nagy envisioned Kmet as a Travis Kelce type(as you could imagine, he was never used in that way). During his rookie season, Kmet played in all 16 games, with 9 games as the starter. He finished that season with 44 targets and 28 receptions for 243 yards and two touchdowns. While it’s not uncommon for it to take 2-3 seasons for tight ends to get acclimated to the NFL. Kmet would up his production in 2021 getting 93 targets, 60 receptions, and 612 receiving yards, with zero touchdowns. Before you complain about the touchdown production, let’s remember who was calling plays the last two years. Nagy just didn’t get him involved in the red zone.

Why is Kmet going to breakout in 2022. He had a 1.71 target separation via player profiler, listed as the 14th best among tight ends. It seemed like Kmet had a lot of drops, but he only had 3 during the 2021 season. His contested catch rate was 46.4%, which could be better, but pretty good for a second-year tight end. In the outside zone scheme, tight ends are also essential whether it be blocking or running routes. If you look at Robert Tonyan who had a breakout year in 2020 with 59 targets for 52 receptions and 586 yards and 11 touchdowns. The touchdown numbers and the lesser more efficient targets pop out. When watching the film, it seems like Tonyan is always running a seam route, and Kmet is running drag routes and corner routes. Tonyan was used heavily in the red zone while Kmet was not used in the red zone.

Luckily Nagy is gone and the torture seems to be over. Luke Getsy is now in charge of the offense, running the same scheme as Matt LaFleur. This is why I have referenced Robert Tonyan so frequently. We can expect Getsy to use the large frame of Cole Kmet in the red zone more, and have him run better route combinations. Going back to what I said earlier, it takes tight ends 2-3 years to break out in the NFL. They have to block like a tackle and run routes like a receiver. The jump from the college game to NFL is a big one for the tight end position. Look at Kyle Pitts, the best tight end prospect in years, it seemed like he was a good rookie tight end right? Well, he was, but he played a majority of his snaps in the slot, where Kmet is traditional on the line tight end.

Kmet does everything right to prepare himself. Whether it be getting absolutely jacked in the offseason, or training with Fields and Mooney, the guy does it the right way. He pointed out in interviews that his connection with Fields has grown. He also pointed out how Fields is more on the move in this offense. Can you imagine how this offense would look if Fields was on the move and Kmet was squiggling around going to the spot Fields wants and hooking up for a big gain? I sure can. The time is now for Mr. Kmet to take that final jump, he is going into year 3 with a new regime that is not committed to him.