Monsters Of The Midwest Covering all things Chicago Bears
Home Uncategorized Is Justin Fields Poised For A Breakout Year in 2022? 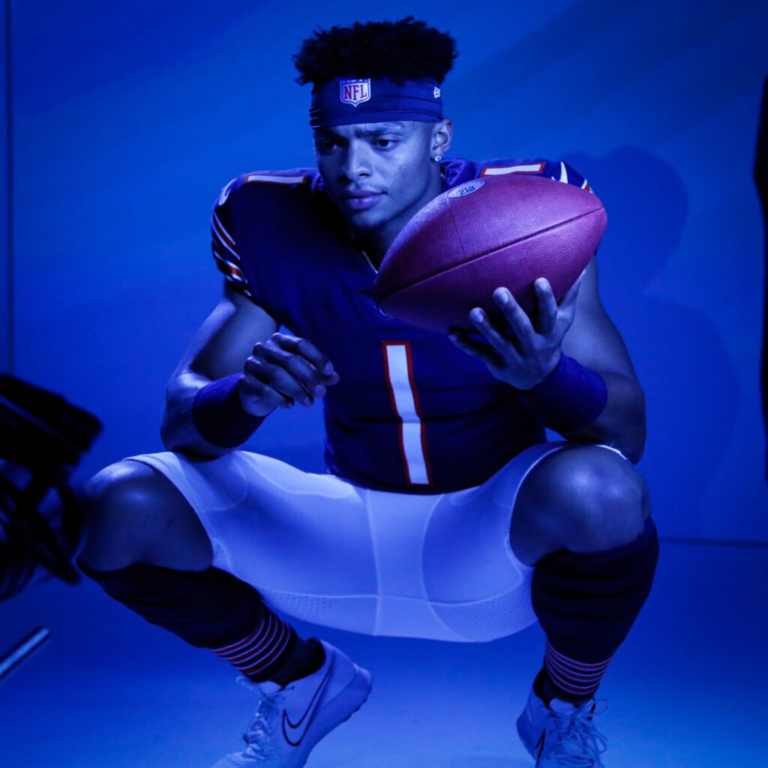 This has been an article long into the making mainly because it required a lot of film which dated back to his days at Georgia. This leads me to the question, is Justin Fields poised to have a breakout season in his second year with the Bears? First, we need to dive into what happened during his rookie season. By now it is no secret that Justin Fields struggled in his rookie year but is that the end result of having a head coach that ran an offense into the ground consistently or just the growing pains that comes with having a young quarterback. Both can be the correct answer.

Justin Fields did have a lot of rookie pains but that is to be expected. For example, it can be seen that he held onto the ball too long or when given a clean pocket he did not step up in it which turned into very avoidable sacks. He also only looked down one of his reads during passing plays instead of letting other routes develop. Which may have been a coaching problem that can easily be fixed over time.

Despite all that, I feel like Fields is poised for a breakout season this year due to the following reasons. With the Bears implementing an offensive system that on paper may be similar to that of the Green Bay Packers. Meaning we should see a lot more play-action which is one of Fields’ strengths from his college game. For example, the first game against the Lions last season. Fields was able to thread the ball to his receivers deep down the field especially his go to guy Darnell Mooney consistently on play actions passes.

Fields had some others positives to note in the play actions game last season. Fields averaged 13.3 (1st overall) yards of average depth per pass as opposed to his 9.3 yards (3rd overall) while running other dropbacks. He also only had a 1% turnover worthy play percentage (3rd overall) when running play action compared to his 5% (34th overall) on other types of dropbacks. Play action was something Matt Nagy himself completely overlooked after he took back the play calling duties from Bill Lazor.

The next factor is the offense will be for Justin Fields only. In 2021, the offense was formed around Andy Dalton and limited the flexibility needed for Fields’ skillset of being able to get out of the pocket and use his legs. I’m fully expecting new offensive coordinator Luke Getsy to implement a lot more bootleg passes and more RPO’s (run/pass option) to help Justin play a similar role he had at Ohio State. Allowing Fields to use his legs opens up a whole different part of the play book. Look at players like Lamar Jackson and Russell Wilson who force defenses to game plan against both their running and passing abilities which ends up open the playbook more and getting other players involved also.

Fields has also been working on his throwing motion throughout the off-season. If you recall, Fields had a more elongated throwing motion. Recently videos have been surfacing of him throwing in OTA’s and minicamp and his motion appears a lot shorter which in turn allows him to get the ball out faster and may help limit some turnover worthy plays.

Finally, Fields has been working on his chemistry with third year wide receiver Darnell Mooney. It seems that those two have been adjoined twins and have spent a ton of time together this off-season. There is no doubt that the Bears view Mooney as their number one guy and both Fields and Mooney are embracing that. Shortly after the Bears season ended Mooney and Fields were seen in Georgia working together and building that chemistry. Mooney is coming off his first 1,000 yard season while seeing an increase of 42 targets as well as having 20 more receptions than a season ago. Just how much will this help Justin in 2022? No one knows, but having that type of chemistry with your number one will drastically improve your ability because you will now know the exact time to throw the ball on the break of his route and hit him in stride.

All in all, I expect to see Justin Fields make significant strides in 2022. If he does that, they Bears will be better off for it.