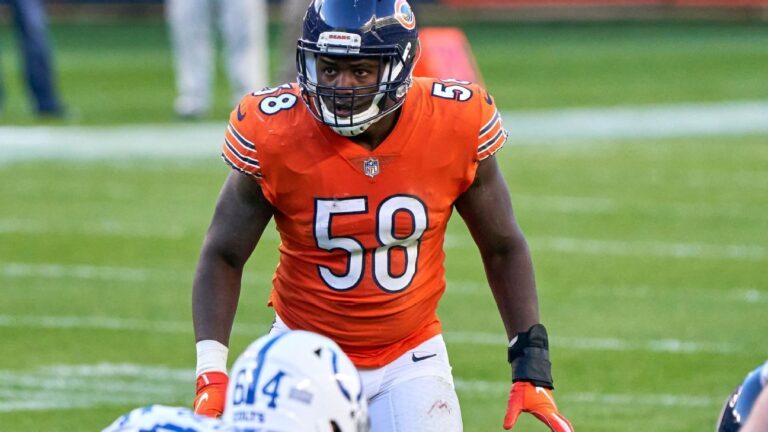 I took a dive into the offensive side of the ball yesterday and now we are switching gears to the defense. Let’s take a look at the current state of the Chicago Bears’ defense.

Eddie Jackson watch out, while you were my favorite player and pick in 2017, the time to step up is now. You got that hard-hitting SS type in Brisker, no excuses here. Deandre Houston-Carson is a good special teams guy as well. A week ago I would have expected him to make the final roster. Now I am not so sure about the addition of Elijah Hicks. I think Hicks is a sleeper, this guy can play ball. Every time you watch his tape he’s making plays. Expect him to be a starter or a big contributor in a few seasons. I don’t expect anybody to be added to this group.

WOW! Am I excited for Brisker’s addition to this defense. The dude is a stud! Hard-hitting and good coverage, there is really nothing this guy can’t do. While most Bears fans are pissed because they wanted some wide receivers, this guy is going to become a fan favorite soon. Cruikshank is a quality backup, I expect to see him on the field in some packages. This group is solid.

Tavon Young is one of the better slot CBs in the NFL, but he can’t seem to stay healthy. I think Thomas Graham is going to push him to start. Duke Shelley is likely cut, I don’t really see a spot for him on this team. I think Graham will steal the job away at some point this year. This group is set.

The corners are finally set, it would appear. Jaylon Johnson finally gets a quality running mate in Kyler Gordon who was a first-round CB to a lot of people. I am so excited for this young duo, the sky’s the limit for Johnson and Gordon. I think Kindle Vildor is a quality backup along with Joseph, Keyes, and Jackson. I expect one of the latter three to make it on the roster. I will need to see how they do in minicamp first. I expect movement in the lower half of this group.

I still want the Bears to try and get Larry Ogunjobi if he can get healthy. Justin Jones is a guy who was often banged up, but a fan favorite when he played for the Chargers. He is a really good run defender that we are waiting on that jump in pass rush capabilities. Jones is not the dominant force Ogunjobi would have been, but he’s a solid plan B for now. I loved Kyiris Tonga for the 3-4 defense, not sure if he will have a big role in the new 4-3 defense time will tell. I think Matt Eberflus will view Mario Edwards and LaCale London as interior guys with all the additions to the DE/EDGE position. Auzoyah Alufohai, is a project for Eberflus and company. Hopefully, he turns into something. He’s got nice size, but he needs to work on some technical stuff. I expect the Bears to add another 3-technique if something pops up.

Robert Quinn is a stud with previous success in the 4-3 defense. I expect the Bears to shop Quinn to a contender during the season. This may make this a breakout year for Trevis Gipson, I am excited to see what he can do. Muhammad comes from Indy so Eberflus has a guy that knows him and the system. Dominique Robison is an athletic freak with the potential to be the sleeper of the 2022 draft class. This dude played QB in High-School, WR in College, then after one year switched to defensive end. He was a late-round guy because he is raw. Another fun developmental guy for Eberflus to develop. Kamara did well in snaps last year, but he was the previous regime’s guy. Snowden is another raw athletic freak, he fits better in a 3-4 defense, I hope this new regime gives him a shot. I don’t expect the Bears to be very active here unless they trade Quinn before the season starts.

Roquan is most likely going to be the weak side LB (will). He is one of the best LBs in the game and I think this defense will put him in an even better position to succeed. I think Morrow will be the middle linebacker. His game has consistently been on the rise and I think he has a chance to be a solid MLB. Caleb Johnson played well in his time last year. I think Johnson is the front runner for the strong-side linebacker(SAM) position, with Dawkins, Adams, and Mack all pushing for depth spots. I expect the Bears to add a few more guys here.

The popular choice for “most excited about” is Brisker and Gordon, but I’m going to switch it up a bit. The players I’m most excited about here are Elijah Hicks and Dominique Robinson. After watching the tape, I really think Hicks is going to be a good player in this league. There isn’t a lot of Robinson tape, but from what I’ve watched and read this kid has a shot to be special, he’s just raw.